As this is my first every Quick Takes (and a brand new blog), I thought it might be fun to introduce my family. Here goes! 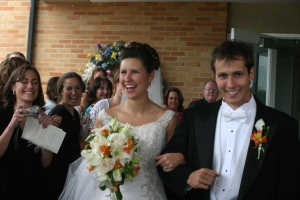 Our wedding was June 10, 2006.  It was the most wonderful, joyful day of my life when I married my best friend, Ryan.  You see, the two of us grew up together in the same small town, same Catholic church, and same group of family friends.  However, Ryan and I didn’t really become close until high school.  He was my best guy friend, the one who listened to all my teenagery woes – until he wasn’t just my best friend anymore.  We survived five years of dating, a year apart in college and 20 months of engagement before this happy day could occur.

Ryan is a man of many hats.  Six years ago he started out in grad school.  I, the ever dutiful wife, followed him into student housing and bided my time until we were blessed with a child.  Four years ago Ryan applied for a hall director job at a nearby college.  We have been living in a dorm apartment ever since! (It was a step up from the student housing, let me tell you.)  Two years ago the stars aligned and Ryan began an app development company with two buddies.  Last January he decided that it was time to walk away from grad school and dive into his quickly expanding company.  Between his jobs as hall director, app developer and computer consultant on the side, my husband spends his remaining free time in husband and daddy mode. 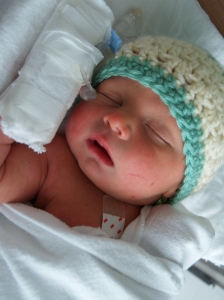 The second most amazing day of my life occurred when Michael entered the world, December 19, 2008.  I spent his first few weeks just holding him, staring at his darling face and wondering where in the world did he come from?  Michael was a super chill baby who I carted around everywhere with me.  He was an instant favorite with the college kids, grandparents and aunties alike (not terribly difficult when you are the only baby on both sides of the family).  I also noticed rather quickly that he tended toward a flair for the dramatic.  After nearly four years, that personality trait still holds strong.  So does his love of companionship…

What do I do with all of my free time?  Ha!  When you are a stay-at-home momma for a quality-time child, there really isn’t a lot of time to spare.  I keep busy with the general household duties, pathetic attempts at homeschooling and a couple of ministries around campus.  I am also training as a catechist for Catechesis of the Good Shepherd.  It’s so exciting to watch Michael experience the atrium while I am simultaneously learning the ropes as a future catechist.

What is the most awesome part about living in a dorm, you ask?  Well, free rent and utilities definitely top the list.  Oh, and free babysitters – college girls love kids!  And there tends to be a lot of free food as well.  Free stuff.  That’s great.  Plus, if I want to get all serious on you, it’s so good to have easy access to daily mass and weekly Adoration.

Since this is the family edition, I have to give shout-outs to our extended family too.  We are blessed to have a lot of our family living nearby.  Michael’s grandparents are all within an hour’s drive of our home – which means we get to see them a lot.  One of his aunties practically lives down the street (two more aunties did live across the street, but have since graduated from college and moved on).  Having extended family in town was a dream for me as a kid (everyone lived five hours away), and I am so pleased to make it a reality for Michael.

Finally, our most recent family photo:

At random intervals I desire to share my thoughts, whether they be deeply metaphysical or simple observations. My inner adult is actively striving to emulate St. Therese of Lisieux – which generally makes my inner child revolt.